How Sulphur is a critical nutrient for grass growth and health 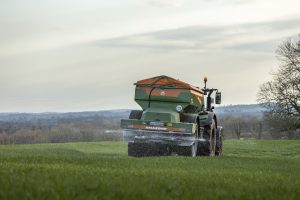 One of the essential elements in the process of protein formation in plants such as grass, and in improving the quality of both grazed grass and silage or hay is Sulphur (S). The availability of S to the crop depends on wet and dry deposition from the atmosphere and from the soil through mineralization. However, with reduced air emissions, using atmospheric S is no longer a reliable source and as a result, it is now recommended that S is an element of all fertiliser applications. Slurry contains S but it is not available to the plant within the year of application. However, S within slurry will continue to add to the soil in the organic fraction over time. As a result, this produces the requirement for S inclusion in fertilisers.

The role of Sulphur in the production of plant protein

Amino acids are the building blocks of protein and 20 amino acids contribute to the make-up of plant protein, all containing Nitrogen (N). Two of these essential amino acids (Methionine; Cysteine) contain S and if deficient in the soil, it will be the limiting factor in the production of plant protein. Protein is associated with chlorophyll (the green pigment giving the colour) which is involved with plant photosynthesis. As a result, the light yellow colour in the younger leaves can be associated with either or both N and S deficiencies.

According to Teagasc, S is an important nutrient for grassland and is closely associated with N uptake and efficiency, as S is required for N to convert to dry matter (DM). Grass growth requires the availability of both S and N and if an S deficiency is present, it will decrease the N use efficiency and reduce the potential grass yield. The result of animals consuming an S deficient diet is the impact on their growth, milk yields (where applicable), and overall feed efficiency.

How to identify nutrient deficiencies

Soil sampling is not an accurate representation of the level of S in the soil as it is mobile and easily leached from the soil. To obtain  a more accurate reading of S levels, it is recommended to complete a leaf analysis during the growing season or take a sample of silage for testing following harvesting. The level of S should be greater than 0.2 % of the DM and the N:S ratio should be less than 15:1 in the case of grass and cereal crops.

Sulphur deficiency in grass and legumes is hard to distinguish from an N deficiency although there is one key difference; with an S deficiency, younger leaves will be affected, turning a pale yellow colour particularly between the veins of the leaf. This is called chlorosis in comparison to N deficiency where chlorosis will appear on the lower, older leaves first.

Over 30% of Irish soils are currently identified as deficient in S and are mostly sandy, free-draining soils with low organic matter. However, it is important to remember that heavier soils can also be deficient. Our recommendation is to apply S little and often during the growing season. Annual applications are needed as there is a difficulty in building up a store in the soil once a deficiency has been identified. Deficiency symptoms become more pronounced during the season but it is now understood that crops also benefit from earlier applications. Recent research trials from Teagasc show a large variation in yield response to S application; from little or no response up to 43%.

Legumes such as clover, have higher S demands than grass and in this case, S is important in nodule formation and N fixation in clover. This needs to be kept in mind considering the increased inclusion of clover in grass swards. It is not recommended to oversupply S as excess can depress the uptake of Selenium (Se) and reduce the absorption of Copper (Cu) by animals, causing Cu deficiencies. However, the low levels as recommended are safe.

Target Fertilisers have an extensive range of grassland fertiliser products containing S. The S in all of Target Fertilisers’ products is in sulphate form and therefore is immediately available to the plant. Our most frequently used products are:

We use cookies on our website to give you the most relevant experience by remembering your preferences and repeat visits. By clicking “Accept”, you consent to the use of ALL the cookies.
Cookie settingsACCEPT
Manage consent

This website uses cookies to improve your experience while you navigate through the website. Out of these, the cookies that are categorized as necessary are stored on your browser as they are essential for the working of basic functionalities of the website. We also use third-party cookies that help us analyze and understand how you use this website. These cookies will be stored in your browser only with your consent. You also have the option to opt-out of these cookies. But opting out of some of these cookies may affect your browsing experience.
Necessary Always Enabled

Any cookies that may not be particularly necessary for the website to function and is used specifically to collect user personal data via analytics, ads, other embedded contents are termed as non-necessary cookies. It is mandatory to procure user consent prior to running these cookies on your website.